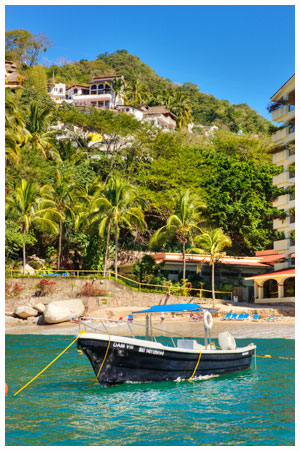 Puerto Vallarta is a famous Mexican resort city situated on the Pacific Ocean’s Bahia de Banderas. Known for its breathtaking ocean views and lush tropical jungles, it is an international destination for vacationers from around the world.

Spanish missionary and conquistador documents chronicle skirmishes between the Spanish colonizers and the local peoples. In 1524, for example, a large battle between Hernan Cortes and an army of 10,000 to 20,000 Indians resulted in Cortes taking control of much of the Ameca valley. The valley was then named Banderas (flags) after the colorful standards carried by the natives.

During the 19th century the history of Puerto Vallarta, then called El Carrizal or Las Penas, was linked to the history of the sierra towns of San Sebastian del Oeste, Talpa de Allende and Mascota. While today these towns are considered quaint tourist destinations, during much of the 18th century, Mascota was Jalisco’s second largest town, after Guadalajara. Mascota and its neighboring towns located in the high plateaus of the Sierra developed as agricultural towns to support the growing mining operations in the Sierra.

During the 18th century, as Mascota grew, Puerto Vallarta grew with it, transforming itself from a small fishing and pearl-diving village into a small beach-landing port serving the Sierra towns. At the time the main port serving Jalisco was located at San Blas, but the inconvenient overland route from San Blas to the Sierra towns made Puerto Vallarta a more convenient alternative for smaller shipments, not to mention smuggling operations, which evaded the tax collectors at San Blas.

Puerto Vallarta in the Twentieth Century

Four influences converged during the 1960s and early 1970s to launch Puerto Vallarta into its trajectory toward becoming a major World resort destination.

First the federal government finally resolved century old property disputes involving the status of communal land originally appropriated from the Union en Cuale mining company to be parceled out as farms. The communal status of the land had stifled development in the town for much of the 20th century. The transition to private ownership of much of the land within present city limits culminated in the appropriation of much of the land in 1973, and the establishment of the Vallarta Land Trust to oversee selling the land and using the revenue to develop the city’s infrastructure.

Second, the American director John Huston filmed his 1963 film “The Night of the Iguana” in Mismaloya, a small town just south of Puerto Vallarta. During the filming, the US media gave extensive coverage to Elizabeth Taylor’s extramarital affair with Richard Burton, as well as covering the frequent fighting between Huston and the film’s four stars. The subsequent publicity helped put Puerto Vallarta on the map for US tourists.

Third, in the late 1960s and early 1970s, the Mexican government invested in the development of highways, airport and utility infrastructure, making Puerto Vallarta easily accessible both by air and ground transportation for the first time. The city’s first tourist boom occurred in the late 1960s and early 1970s because of this work. During those years most tourists in Puerto Vallarta were Mexican, and the reason they started traveling to Puerto Vallarta then was because the trip between Guadalajara and Puerto Vallarta was made sufficiently convenient because of the government’s investment in infrastructure.
Finally, in 1968 the municipality was elevated to the status of a City. The change in status reflected the renewed interest shown by the federal and state government in developing the city as an international resort destination.

Also significant was the August 1970 visit of US President Richard Nixon who met with Mexican President Gustavo Diaz Ordaz in Puerto Vallarta for treaty negotiations. The visit showcased Puerto Vallarta’s recently developed airport and resort infrastructure, and thus contributed to the growing visibility of the city as a resort destination.

Puerto Vallarta is named after Ignacio Vallarta, a former Governor of Jalisco. In Spanish, Puerto Vallarta is often shortened to “Vallarta”, while English speakers call the city P.V., for short. The city occasionally is spelled or pronounced as Porto Vallartan, and in Internet shorthand the city is often referred to as PVR.